The Kings Hall displays 16 portraits painted at the end of 18th-beginning of 19th c. depicting the Grand Dukes of Lithuania and the Kings of Poland (picture 1).

Together with these portraits, there is displayed Stephen Bathory's (Grand Duke of Lithuania and a King of Poland) portrait painted by Vincentas Smakauskas (1797–1876), representative of the Vilnius Art School. It is one and alone in the whole Lithuania full-length portrait depicting this high-ranking historical figure.

There are 2 contusz sashes displayed in the Hall: one of them was ordered by Polish gentry and woven in the 2nd part of the 18th c. by French weavers in Lyon. This sash has been worn by Jokūbas Ignas Nagurskis (1734–1790), fundator of Kurtuvėnai church, chevalier of the Order of St. Stanislaus and the Order of the White Eagle, one of the richest landlords in Samogitia and Grand Duchy of Lithuania. The other sash, created by Jonas Mojarsky in 1770–1780, was woven at Sluck manufactory, Grand Duchy of Lithuania, of natural silk, gold and silver thread. It is a classical example of a contusz sach attributed to the most noteworthy kind of sashes.

The museum owns 10 portraits, created by J. N. Hueber (1802–1885) in the middle of 19 th c. These artworks perfectly reveal character and moods of the person, are painted with gently realistic fashion.

The Museum stores a set of 84 paintings, created by Sofija Riomerienė (1885–1972), two of them – her husband Eugenijus' and daughter Elena's portraits are here on display. S. Riomerienė was a profesional artist, studied arts in Vilnius, Krakow, Munich and Paris. She lived in Tytuvėnai estate and had her own private gallery.

Sculpture "The Abduction of Sabine" by Italian sculptor Giovanni Bologna, an example of Manierism style, is presented in the Gallery.

Landlords Portrait Gallery reflects not just the personalities of Lithuanian gentry, their interests, but the development and style of portraits, circumstances of their origination and dissemination.

The atmosphere of the Library is softened by the Biedermeier style furniture and various trivia: souvenir box, inkpots, a table-lamp, a clock, photos, depicting Gorskis family, the Daujotas family tree.

In estates, besides the representative halls, there were also the smaller rooms where more intimate life was going on. In this exposition such everyday life is depicted in the Yellow and Green Drawing Rooms.

The Green Drawing Room – man's room – with dominating hunting and military items creates quite different moods and style (picture 9). The highlight of the room is a collection of arms. There are exposed protective arms (helmet, breastplate, armour collar), cold iron arms (small swords, daggers and swords) and firearms (rifles, pistols, revolvers). The most ancient of them are made in 17th c.

Massive dark furniture from the 19th c. helps to create typical to man's room atmosphere: commode decorated with protuberant floral ornamentation, the card-playing table with lacework ornamentation, upholstered furniture and a cupboard. There are 3 engravings of impressive size on display, engraved by prominent French artist B. Picart (1673–1733) according to the artworks of painter Ch. le Brun (1619–1690). Watches and pipes reflect man's portliness. Glass, bronze and silver items were used not just for practical purposes, but also like adornment of everyday surroundings (picture 10).

The Gallery, situated next to the Green Drawing Room, represents Western European Art – landscapes, portraits, private life scenes: "Landscape with Sheep" by B. P. Ommeganck (1755–1826) (picture 11), "Saying Good-bye to the Bride" by L. Loffler (1827–1898), "Private Life Scene" by A. Ricci (1854–1919) (picture 12), "The Middle Nave of the Baroque Church" by J. V. Genisson (1805–1860) and others. There are two copies of antique sculptures, made by G. Volpat (1732–1808): "Muse of Comedy Thalia" and "Muse of Epic Poetry Calliope" (picture 13). The Gallery recreates the image of the previously held in estate galleries, illustrates landlords' taste in art, their sophistication, interest in European values.

The Eastern Art Gallery presents fine and applied arts collections from the Far East. Chinese and Japanese items have been exported to Europe since the end of the 16th c.

When after the isolation, that lasted hundreds of years, Japan at last let foreigners in at the end of the 19th c., a real obsession of Japanese things began in Europe. The society's elite began to collect Eastern art and to organize expositions. These Japanese prints got to the Šiauliai Aušros Museum when the Soviet authorities nationalized Santekliai estate in Northern Lithuania in 1940. There are 21 works from the so called Edo period (1603–1868).

Faience and porcelain items originally are from China (picture 15). These vases, flower pots, plates and bowls most probably are made in the same artist's workshop.

These Qing Dynasty dishes are from Beržėnai estate (Šiauliai County), which belonged to the countess Jadvyga Potulickaite-Hutten-Čapskienė.

The Dining Room presents the most famous Western European porcelain manufactories collections from the 18th-19th c.: dinner and coffee sets, various porcelain and faience items. Sets of glasses, silver cutlery and furniture of Art Nouveau style are exposed here as well. The adornment of the Dining Room is a table served for dinner (picture 16). The porcelain dinner set was made in Sevres porcelain manufactory in France in the first half of the 19th c. It is one of the five most famous porcelain manufactories. The set is decorated with openwork plant motives painted in gold and three letters, JSJ, monograms written in gold. On the table there is also a set of glasses with engraved crowns and monograms JJB. The candlesticks are made of crystal, the cutlery – of silver.

In a cupboard (picture 17) there are presented porcelain collections from the most famous manufactories of Western Europe, dinner and coffee sets from the 18th and 19th centuries. Here you can see a dinner set from Meissen manufactory: a soup bowl, a sauceboat, a spice dish, a jug for cream, a butter dish, a plate and a cup with a saucer. The dishes are decorated with the motives of blue rambling blooming flowers. There is also displayed an impressive coffee set decorated with South Europe landscapes and golden ornaments with plants on blue grounds from Saint Petersburg Imperial Porcelain Factory. There is abundant collection of cups made in porcelain manufactories in Meissen, Vienna, Berlin, England and France.

There are six decorative plates on the wall of the Dining Room. In five of them there are shown characters from Russian writer N. Gogol's poem "The Dead Souls". These plates were made in brothers Kuznetsov Porcelain Factory in the beginning of the 20th c.

Most of the exhibits are from Northern Lithuania estates – Beržėnai, Renavas, Kelmė and others.

On the ground floor of the Villa there is an exposition "Provincial Town".

Is Šiauliai a provincial town? In the most general sense – yes, it is, as the town is located quite a distance to the North-East direction from provisional capital Kaunas (Vilnius was occupied by Poland at the time). Šiauliai became an actual cultural centre of Northern Lithuania and also retained the image of industrial centre, gained at the beginning of the 20th c. About 85% of the whole produced in Lithuania leather, 60% of footwear, 75% of flax fibre and 35% of candy was made in Šiauliai.

Exposition starts from the stylized Street. "Vilniaus Street is the same important to Šiauliai as Laisvės Avenue is important to Kaunas. Starting from the Milšteinas Cafe and up to the Nurokas Bank a crowd is flowing, like the waves of the sea. When evening comes, you have even to plough using your elbows. Šiauliai dwellers – "the streets-polishers" do not surrender the Kaunas dwellers in this: they are popping, tussling, flirting, spitting sunflower seeds and swearing". ("Sekmadienis", 1930, No. 48) (picture 18).

From numerous views, depicting Vilniaus Street of the time, a post-card released by Mauša Ordman in 1930 had been chosen and enlarged for exposition. A fragment of the street was created of authentic stone cubes, which during the Interwar Period had been used for paving the street. Unique exhibits are the enameled signboards of state and insurance offices, brewery "Gubernija", those signing the names of the streets or house numbers.

The reconstructed window-case of the Trading Company "Dubysa" (picture 19) tells the story about the items, which used to be here on sale: motorcycles, bicycles, typewriters, radio receivers and domestic electric appliances. The Trading Company also had its own radio workshop, where radio receivers "Dubysa" were manufactured: details were brought from Germany and the wooden cases were produced by local joiner Sutkus. One of this kind receivers is here on show, besides the others produced by Western European.firms "Telefunken", "Markoni", "Siera", "Vefar".

In Šiauliai, the same like in other towns and townships, there were a lot of Jewish traders. According to iconographic data, there was recreated one of the most popular in Šiauliai shop and jewelry – engraving workshop "Brothers Shapiro Bussiness", that had clocks, gold, silver, amber, crystal and marble articles, tea-kettles and optics on sale (picture 20). The workshop manufactured rings and other kinds of jewelry according client's request. The showcases accomodate noteworthy clocks and watches produced by Western European firms (German "Gustav Becker", Swiss "Louis Grisel", "Telephone", " Peter & Fils Brenets", etc). There are unique pocket-watch and mural clock on show, that were assembled in the "Brothers Shapiro" and having inscriptions "Br. Šapiro, Šiauliai". Jewish history and culture is represented by 24 drawings by artist Gerardas Bagdonavičius: Jewish characters ("A Portrait of a Jew from Vilnius", "Politicians", "A Jew from Siesikai", etc.), drawings depicting interiors and exteriors of Kelmė, Užventis, Šiauliai synagogues.

Popular town dwellers' pastime was watching motion pictures. In Šiauliai there was operating notary Švabinskis' and his companion Gocas' famous cinema "Kapitol". The owners were striving to astound audience with constantly introduced novelties and modernities. The 450 seats hall distinguished with good acoustics, properly equipped scene. It was here, in this cinema hall, that dwellers of Šiauliai sighted sound-film for the first time. During the WW I and between the two world wars, cinema halls in Šiauliai were not just demonstrating motion pictures, but also various events, like professional and amateur theatre performances, festivities, commemorations, were taking part there. Now in the hall, introducing "Kapitol" cinema, you can see the placards, inviting to those various events.

Cinema projector, produced in 2nd decade of the 20th c. in Germany is here on display (picture 21). It was bought from "Grass u[nd]. Worff" in Berlin. This projector was used until 1924 in Šiauliai cinema "Fantazija" (later – People's House), where soundless motion pictures were displayed. 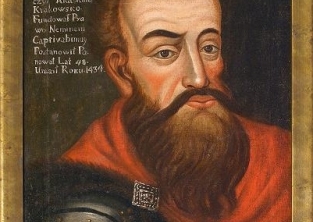 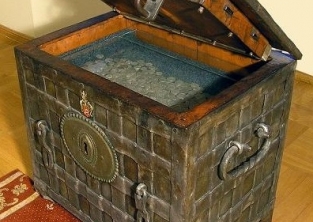 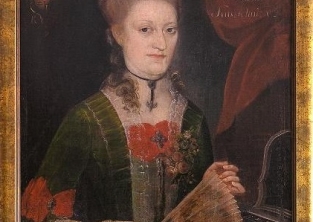 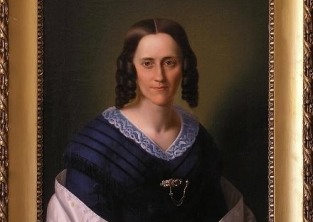 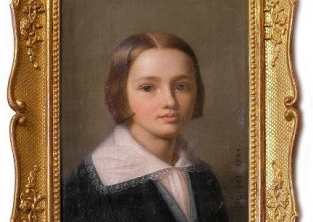 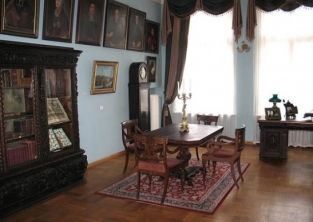 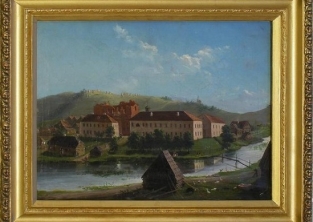 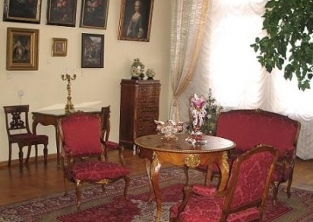 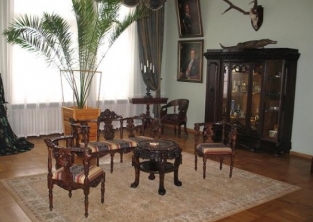 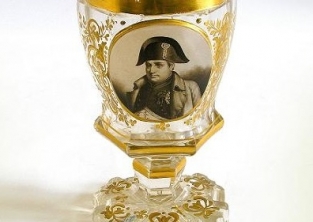 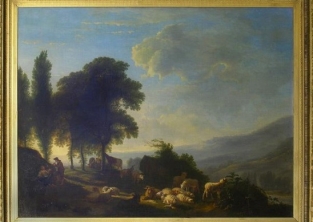 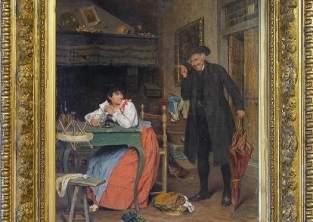 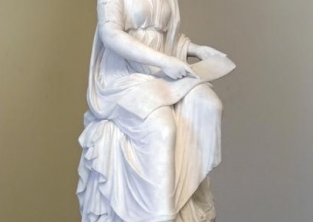 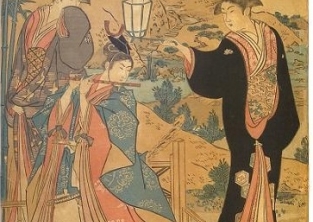 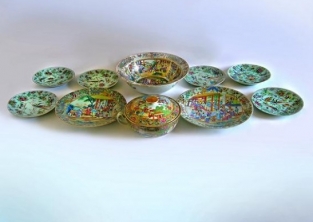 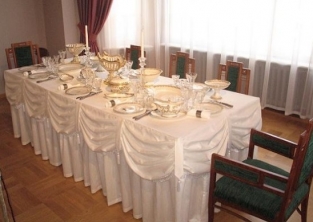 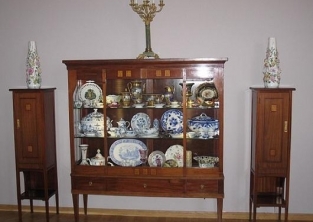 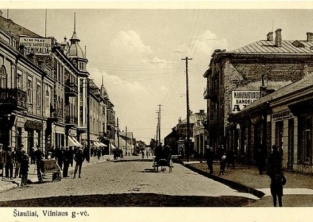 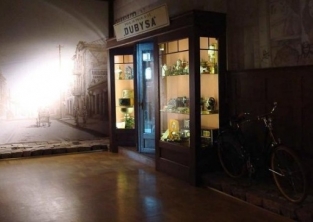 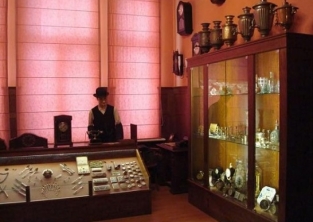 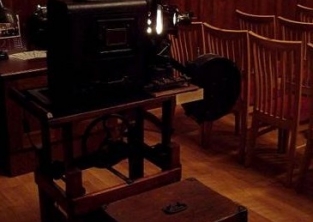