Back
Peasants’ Mode of Life and Existence

Peasants’ Mode of Life and Existence

An ethnographic exposition is arranged in two halls and reflects the peasants' mode of life and existence in Samogitia and Northern Lithuania at the end of the 18th century, till the first part of the 20th century.

The Museum's collections, Šiauliai and its region's geographic position and the will to reveal the peasants' material and spiritual life determined the theme of the exposition.

The first exposition hall is set to present the peasants' mode of life. Open spaces of the interior attract visitor's attention. In one of these spaces, a peasant's hut (the end of the 19th century – the beginning of the 20th century) is recreated from the outside – a small plank roof, partitions of the log walls; the hut is recreated from the inside as well – as if illustrating the type of living characteristic to the peasants of that time, when in the same room children are being cradled and the guests are seated by the table covered with white table cloth in the so called ‘good corner' , which is adorned with the paintings of the saints; when a fancy towel rack hangs nearby and when light comes from the adjusted height stand for spills. An old, 1863 dated cupboard stands out from the furniture. The impression of a "real life" is strengthened by two women mannequins, dressed up by the clothes of a city woman and a peasant woman from Samogitia (see Fig. 1).

In the other open space, an environment of the store room with a thatched roof is created along with various household utensils; and a special lighting which creates an effect of twilight strengthens the view and mood of the store room (see Fig. 2).

A model of a Lithuanian farmstead captures visitors' attention. Visually captivating, decorated with subtle artistic details, a generalized Lithuanian farmstead encourages speculations, what at all the times home meant for a Lithuanian; it was the home around which the whole family's life circled. The exposition strives to reveal the originality of the home, as the fundamental family residence, stable farm unit, ethnic architecture and ethnic culture. A more curious visitor will show an interest in the specific buildings as well as the elements of the backyard and more interesting homestead details. The author of the farmstead model is a folk-artist Stasys Rudokas (see Fig. 3).

The second exposition hall of the museum gives the visitor an opportunity to have a look at peasants' emotional attitude towards world which is expressed through ethnic art, customs of calendar celebrations and through the Christian peasants' culture – sacral folk sculptures, small scale architecture. The Christian culture is expressed through Shrovetide masks (see Fig. 4), carved walking sticks, distaffs, wooden whistle toys as well as it is reflected in the patterns of fabrics, knittings, sashes, Easter eggs, in the shapes of iron cross tops, sculptures of saints, ornamentation, patterns and in the uniting everything symbolism. Among all these exhibits unique ones are these: 1887 and 1891 dated distaffs with initials and 1897 dated krivūlė (crooked staff used to call a village meeting in old Lithuania) marked with initials.

The main focus of the exposition hall – the Crucifix, the fundamental symbol of Christianity, is shown in the improvised roadside pole with a statuette of a saint. An exceptional place and attention is paid for the Pietà , and the Pensive Christ . Over all 50 sculptures of saints are exhibited. A considerable amount of them is the work of a priest and sculptor Antanas Rimavičius who lived in Latvia. Having not studied at an art school, but having created sculptures for all his life, the carver's creation is a distinctive and original branch of Lithuanian and Latvian folk-art of the end of the 19th century and the beginning of the 20th century. There are known over 500 his works and 175 of them, given as gifts, are preserved in Aušros Museum (see Fig. 5). In 1997 there was released an album "Antanas Rimavičius. Sculpture. Road of Suffering" compiled by artist Arūnas Vasiliauskas.

Wrought iron heads of the crosses, laid out above the glass cases in a background of stylized natural plank wood, crowns the exposition. These are the exhibits from Samogitia and Northern Lithuania of the 18th century and the beginning of the 20th century. At the top of the oldest weathervane a date "177..." is cut out (the last numeral is broken off). A top of the weathervane in which the date "1885" is cut out in the horizontal cross-piece is an exclusive one as well (see Fig. 6).

At the end of 2008, a unique restored double-sided painting, painted by an unknown author in the second part of the 18th century, enriched the Christian peasants' aspect of the existence in the exposition. The Holy Mother of God (Mary) with the baby is portrayed on one side of the painting, while on the other side – God the Father, blessing the Holy Family is represented. The painting could have belonged to the church or the Dominican convent; it could have been used as a church flag or a decoration. 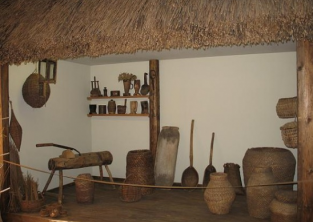 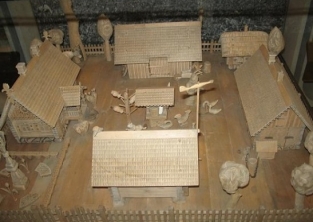 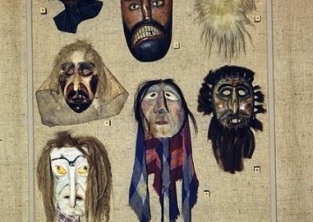 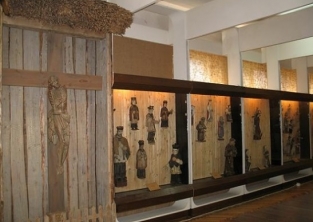 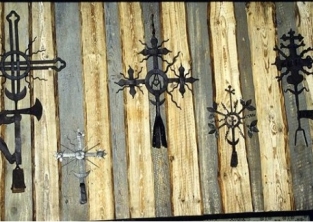