Back
“Jewish Heritage in Šiauliai: the Merchants Frenkelis“

History of Šiauliai unimaginable without numerous and influential Jewish community. In 1909 there were 56,4 percent of Jews in Šiauliai. Manufacturers, merchants and benefactors were the most distinguished representatives of Jewish Community in Šiauliai. The Frenkelis family in early 20th century undoubtedly influenced town's economical and cultural development greatly, glorifying the name of Šiauliai city all over the world. It is symbolic and meaningful, that under lucky historical circumstances, the exposition devoted to Jewish heritage is housed exactly here – in the former Frenkelis family home. In context of Lithuanian architecture, unique Jugend (Art Nouveau, Secession) style mansion is the most valuable object representing Jewish heritage.

After you open the door and enter Ch. Frenkelis Villa, you get into the wonderfull world of the past, created by the owners of the Villa, Chaimas and Dora Frenkelis, later, between the two world wars, cherished by their son Jokūbas, and – at the turn of the 20 th and 21 th centuries - resurrected to a new life by restorers (picture 1).

Exposition displayed on the ground floor acquaints visitors with merchants Frenkelis, their heritage, reveals the story of family's life and its activities. As just a few photos depicting surroundings of the family survived, designer of the exposition, Skirmantė Vaitkevičiūtė, chose an interesting way of interpretation while revealing the living atmosphere: informative posters resemble curtains, made of extravagant material, thus creating impression as if we secretly open the door to the home of the people who lived there years ago.

The exposition tells about Ch. Frenkelis' career starting from ordinary leather dresser and up to the manufacturer-millionaire, "The King of Leathers", about remarkable success and popularity of his leather factory, about the phenomenon of manufacturer Ch. Frenkelis. The posters represent Frenkelis family as generous charity donors, supporting Šiauliai and city's Jewish Community: Talmud Torah school, Ch. Frenkelis factory workers' synagogue, Jewish hospital, Old People's Home (picture 2). Nowadays these buildings house various educational, cultural, and medical institutions of Šiauliai city. The exposition also forcibly presents the 100-year history of the Frenkelis family's dwelling house, that is a part of Šiauliai Aušros Museum since 1993.

The building constructed in 1908, in Modern (Art Nouveau, Secession, Jugend) architectural style, is the only one of its kind in Šiauliai and one of a few in Lithuania. Till 1940, it served as dwelling house. Part of the building was 14 years used as Šiauliai Hebrew Gymnasium. In 1940, Ch. Frenkelis Villa became military hospital (Soviet, German and again Soviet) and this stage lingered for more than 50 years. In 1993, the Villa was given over to Šiauliai Aušros Museum and in 1995 the restoration works began. Currently, Ch. Frenkelis Villa is functioning as a historical cultural centre, inviting to the constant exposition, offering the town community a wide choice of cultural activities, exhibitions, concerts, and other events. Ch. Frenkelis Villa becomes an attractive space for meetings of high ranking leaders of states, significant international events.

The exposition presents original exhibits and thirteen "Drop jet" placards, on which, using digital technologies, is concentrically given abundant and diverse, based on facts information, documents, photographs, printed matters. A piece of leather with fabric's logo (picture 3), unique the 25th anniversary star of Jokūbas Frenkelis' Firefighters Team (made by Šiauliai jeweller Guzauskas in 1933), elaborate entitlements "Nako", "Rindechromas", "Šervita" and similar deserve your attention. Quite recently the exposition was refreshed with newly acquired female boots, produced in 4th decade of the 20th century in footwear factory "Batas". They had been worn by Teodora Parėdnienė from Lygumai, Pakruojis region.

Impression is even more intense due to the authentic fragments of ceiling mouldings; colouring of the exposition is fitted to authentic polychromy of the interior with prevailing soft brownish and rosy nuances.

Summing up, the exposition represents the peculiarities of Jewish culture at the end of the 19th-first half of the 20th c., reveals the lifestyle of the most famous Jewish family in Šiauliai – Frenkelis family – and genesis of the building, that is significant both architecturally and historically. 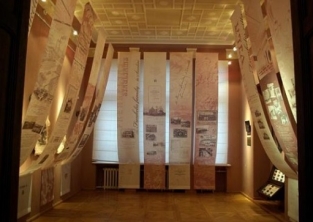 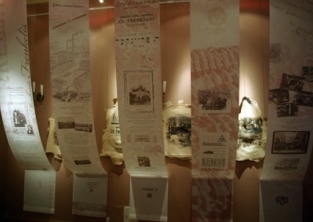 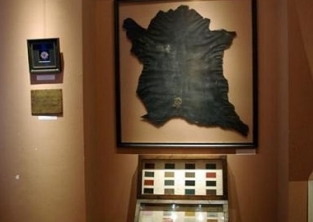