Decoding the RAF in Siauliai

Decoding the RAF in Siauliai


The exhibition “Decoding the RAF in Siauliai” – is an international project implemented by the Photography Museum together with the Royal Air Force (RAF) performing the NATO Air Policing Mission at the Air Force Aviation Base at Zokniai Airport in Šiauliai, Lithuania. The exhibition presents works by three photographers - Iain Curlett, Rolandas Parafinavičius, and Edvardas Tamošiūnas. Iain Curlett – Royal Air Force photographer documenting the lives of soldiers. Rolandas Parafinavičiaus and Edvardas Tamošiūnas represent different generations of photographers in Šiauliai. The creators joined the project and spent a day at the Air Force Aviation Base capturing the everyday moments and moods of soldiers in their environment. After entering the securely protected area, the photographers gathered their research and created a photo report, in which the viewer is invited to enter and experience the nuances of a place usually off limits to civilians, to get to know the portraits of soldiers working in the area, to get a better insight into their everyday life. In the captured images, we see what our eyes usually do not see - soldiers not during parades or public holidays, not on official visits, but sitting and talking, playing sports and resting, walking around military objects. The viewer's gaze is guided by the three photographers between metal containers set up in the airfield, from which passages are formed, and the spaces in which soldiers train and discover the coolness of the shade in the summer heat. This plain military air base has a laconic scenery that catches the eye – fence fragments, ascending fighter jets, runways and machinery. Admiration is formed by small nuances – blooming flowers and green plants in pots contrast with the monotonous and faded landscape of containers. The name of the exhibition presupposes that the aim of photography is to solve the code of a soldier and see what is hidden behind a uniform, to grasp the human emotions and artifacts that reveal the everyday life and individuality of the warrior. Not coincidentally, a portrait becomes one of the main tools to decode a soldier in this exhibition.

This genre is used not only in photography: The exhibition is accompanied by audio-visual material - videos in which soldiers are asked playful questions that require a short, unprepared answer, thus continuing our acquaintance, becoming closer and more personal, and increasingly more distant from military regulation.

The project ”Decoding the RAF in Siauliai” was born out of enthusiasm for establishing human contact between the townspeople, city guests and incoming airspace guards, who are often seen as indistinguishable and simply referred to as NATO. This project aims to get to know each other better by meeting in a cultural space.

Supported by the UK embassy 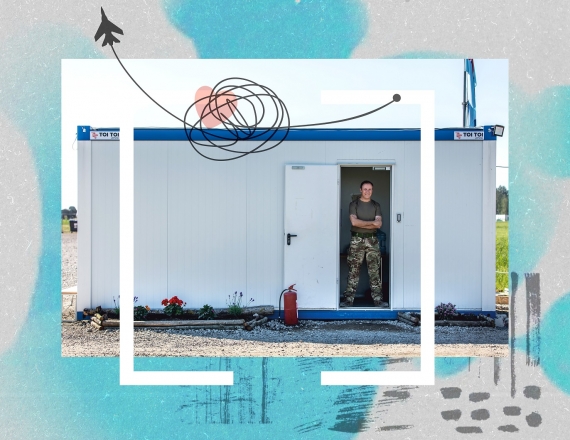